TEACHING IN CRISIS? (My Take/Suggestions)

February 5, 2020 / Scott Olson / Comments Off on TEACHING IN CRISIS? (My Take/Suggestions) 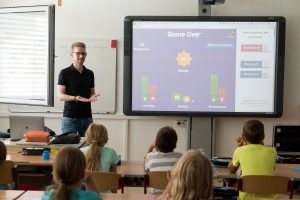 This year we are again hearing more about a shortage of teachers across the nation (and Australia, if you can believe it). A recent Gallup poll in the US shows that almost 50% of teachers are currently looking for a new job or a change. Add to that list athletic officials (referees), coaches, and many other professions aligned with them as well. The reasons for this don’t really come as a surprise to me since being a teacher/coach was my (and my wife’s) chosen profession and it has been for many years. I was one of the so-called “front line” people and we have a tendency to acquire a clear and common sense perspective on things. The fact that so many administrators and academic thought-leaders didn’t see this coming is the biggest surprise. So let’s take a look at the problem.

NOTE: Money ($). Let’s get this out of the way now. It is always brought up! Throwing money at a problem seems to be the easiest answer for every instance, but it always isn’t pragmatic. Of course, if schools paid teachers a six-figure salary, you would have more people going into the profession. No question! No more problem. I would, however, be cynical about their motives and commitment though. Now I run the risk of getting an angry blow-back from teachers, but I do believe that most go into the teaching profession with more altruistic motives. They want a chance to impact and shape lives (as I did). Also, not too long ago (around 15 years), there wasn’t a teacher shortage: there was a glut. Many students were taking education classes back then knowing full well, that in some instances, they wouldn’t be getting paid a lot. Even though the pay was low, interest in teaching was still high. Flash forward to today with $ still being considered a problem, but now we face a crisis. Why? What has changed?

With the money issue on the side, let’s look at something, that if it were improved, would act as a good counter-balance the financial worries—-working conditions. Plain and simple! Even though benefits for teachers have been slowly going up, working conditions have been going consistently down. There has been a shift in power from the teachers (the front line) to the administrators and eventually to the students/parents. There is a reduced sense of autonomy for educators and this has really caused difficulties for them with regards to creating and maintaining an effective educational environment. They have been under-cut, in a sense, and this has added to the crisis.

Inevitably poor working conditions lead to an increase in “stress”, and this is a common complaint that comes from almost all teachers (#4 most stressful job in recent ABC Poll). I will focus on three aspects that need to be addressed.

1. Lack of Control: A major source of frustration and stress, teachers have lost more and more control of their classroom and their students, seeing discipline erode along the way. Realistically, it can be said that the students are now more in charge of what is going on and this has come to be over many years. Teachers really don’t have much say in matters, such as discipline, anymore and the kids know it.
I can remember one such example from way back (around 2003). An unruly girl student ran out of class, into the halls, caused a major scene before eventually running out the school doors and onto the outdoor track. Most of the school soon became aware of this disturbance and those classes facing the track (3 floors worth) turned their eyes toward the unfolding drama. They saw two assistant principals armed with walkie-talkies try and corral the student. Just when all of us thought she was going to be apprehended (she and one Asst. Principal were walking straight towards each other), the girl simply walked right past the administrator while ignoring his pleas for her to stop. The administrator then wheeled and followed her, talking anxiously into the talkie. The lesson of what the students watched was not lost on them. She (they) were in charge and even the top people in the school food chain were basically helpless. This has gotten even worse in recent years and teachers are aware that they have little recourse and that the kids hold their career in their hands. Witness how one Iowa school district deals with unruly students https://whotv.com/2019/05/31/extreme-violent-student-behavior-pushing-iowa-teachers-to-breaking-point/. They simply leave the kid alone in the classroom, leaving them to do whatever damage they wanted. The school decided having the of the class move to another location was best. They ceded control of the classroom to somebody who misbehaved…I wonder what the rest of the students thought? What lesson was learned? This brings me back to a Twilight Zone episode entitled “ It’s a Good Life”. https://m.youtube.com/watch?v=QxTMbIxEj-E&list=PLiCSo4Lpq_Anm-WiFtyB-C3-4Ff6OXXAJ&index=1. A child with extraordinary mental powers (possibly legal ones nowadays) has control over the adults because of these powers. The adults (teachers in my analogy) are reduced to scurrying about with little recourse to correct the child for fear of retribution. Again, the ending is predictable. The problem is only magnified by the next.

2. Lack of Support from Administrators (and school board): All teachers know that the chain of command is rarely followed. It has come down in many districts as educators find that parents go directly to school board members, bypassing a few steps. Administrators and Superintendents have become very sensitive to pressure and they have seen what damage can be done by parents and social media. When it comes to them taking a difficult stand and backing up a teacher vs the possibility of them losing their job and their sometimes 6-figure income…well, we all know the end of that story. I once had a principal say recently that what she did was for the “good of the kids” when it was, in reality, what was best for her and her financial future. I even had a friend, a life-long educator, tell me (eight years ago) that he told his son (who was just starting teaching) to do “what was best for him”. This is how far off the mark we have fallen. That isn’t why I went into teaching.

I believe that teaching is a “relationship “ business, but many higher-ups are turning it into a more “business” business by adapting many ideas that come from this model. Teachers are spending an inordinate amount of time on filling out paperwork that is then shoveled onto a mountain of data, robbing them of the valuable time needed in formulating strategies to better facilitate the educational process. The classroom is becoming antiseptic and “teaching moments” are sacrificed for chasing numbers. Just as I have found in coaching, every team has different ability levels and the definition of success should be different for each. Some teams can win 20+ games easily, whereas another would only win 10 if they maxed out their abilities. In my eyes, both teams would be successful because they got better than average results based on their potential. Yet, if you only look at the final numbers, one is a failure. So is the data that schools use with regards to classroom performance. The number is sacred. Also, the methodology that works at a fine suburban school may not translate in a rural or urban setting, where the teachers should be allowed to adjust to the situation. As a coach I felt it very necessary to understand my players better so that I could determine what actions would work best for them.

This has just been reinforced recently by a talk with a first-year teacher. She was struggling having been put in charge of a group of students which had some who struggled with school and she was feeling low. Her administrators were on her about her class not reaching the benchmarks that had been set up. Her greatest desire, to make an impact on children’s lives like her teachers had done on her’s, was falling victim to the numerical chase. Her low morale was only echoed by two fellow teachers who were discussing getting out of teaching the next year. Anyone else see a problem with this?

Teachers are necessary. They are the front line of education and have the greatest impact on students. To disenfranchise them, to lower their morale, is a serious step. Teachers provide an essential service and this current shortage is becoming a huge, but avoidable, problem. We need to come to an understanding on what we truly want out of our educational world, what we need to do to attract those who will help best shape it, and then empower them to best do their jobs. I may be just a coach, but I have learned a good deal about what is necessary for getting a victory…time to go to work.