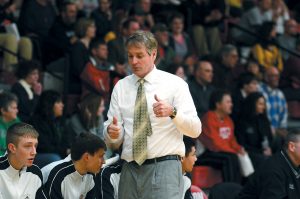 “Your guys didn’t look ready to play”. This comment came many years ago from the successful veteran coach, Steve Sandholm, after his state-ranked Knoxville Blue Bullet basketball team had just got done drubbing my Orion squad by 17 points. It wasn’t even that close. I didn’t take this comment as a dig so much as I was wondering about this myself. I may have been naive or oblivious; I don’t know. I was a second year head coach and I had much to learn. But I will tell you this! The lesson that Coach Sandholm unexpectedly gave me that night has stayed in my head ever since.

We had spent much of that week in practices leading up to that game concerning ourselves mostly with their plays, their defenses and such. We focused on schemes that we thought would work for us and other typical X’s and O’s stuff. Knoxville was a powerhouse with college-bound players, so I believed that we had to come up with some sort of great plan. That week I felt as if I was an analytic teacher only concerned with numbers and equations, of how our O’s would beat their X’s and vice versa. The gym was a bit like an antiseptic classroom, but I liked what we were going to do.

“You’re inside guys looked a little intimidated…” More from Coach Sandholm. Perhaps! My 6’3” center was a great kid and a marvelous student (He is currently a Dr. of Engineering in California). Well dressed for every school day, he was the kind of kid you would want to date your daughter. Unfortunately, he had to square off with an athletic, burly, 6’6’ player who looked like he had just played 2 years of college ball. He wasn’t the only concern because Knoxville had tough guards as well (one went D-1), but I was impressed with the center in the pregame warmups, his leaping ability, and with his fixed glare and intimidating presence. We had “the plan” however. Heavyweight champion Mike Tyson once famously stated that “Everyone has a plan until they get hit.” And we were about to know the truth behind that quote.

2 points and 1 rebound! That’s what the stat sheet read after the game for my guy in the middle. Their guy dominated! That is what Sandholm was getting at. All of us, including me, failed on that night. My focus going in was on the “plan”, but I had totally forgot about the passion that would be needed as well. Too much scheme and not enough heart and grit. This was out of character for me. I was not a coach like Tom Landry or John Wooden (going waayyy back here) who were mostly stoic and great tacticians. This wasn’t calculus or chess! I had to focus more on getting my guys ready to play the next time we faced them and not just the scheme.

The days leading up to the “next time” were different. We were playing for a Sweet 16 berth in Illinois (a place never visited by our school before) and the enormity of that fact was understood. Every practice, every drill, every talk echoed back to the pounding we got back then. Emotion, effort, and competing were now registering in our heartbeat. This time we would be ready…focused…and tough. This time we were going to take it to them!

Early in the first quarter it was obvious that we were an entirely different animal. Their players struggled to get open, their interior players had to fight for every inch inside. It soon became a question not of “How much they would score?” to that of “Would they score?” After the first quarter that saw us aggressive on both ends of the court ended, my center slapped his hands on the bench and said “Get me the ball.” The tables had turned! The team transformation was in full evidence. On that night, we played with not only our “minds”, but with our “hearts” as well. On that night, we beat #2 Knoxville by 17 points! On that night, we showed that we had learned learned a very valuable lesson. Thank you Coach Sandholm…