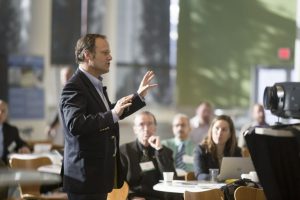 Getting hired as a speaker is a difficult undertaking at times, but the hardest time I had was when I was trying to convince my “own” daughter to let me speak to her high school volleyball team. The squad was getting ready to start the first round of the State tournament, so it was kind of a big deal. She was the senior captain of the team and my wife was constantly in her ear about having me come to talk to her team. “Why don’t you just have your dad talk to your team?” was her question. My daughter immediately shot back a look of “yea…right”. Finally my wife was able to break down the door and convince her to give me a chance (she has a great penchant for doing this). My daughter, in turn, had to go and convince her coach that this was a good idea. Not so easy in the adolescent world.

Now Katie’s coach was a veteran coach who had won a ton of games and was set in his ways. On top of that, he was wrapped really tightly. If you were to break down his body composition you would find it to be 20% bones and muscles and 90% nerves (I know that doesn’t add up, but he had the extra 10%). He probably the guy who the comedian had in mind when he first uttered “He would be the type of person who would make coffee nervous”. Surprisingly he said “yes”.

So it was set. I was to address the team after a practice in the “health” classroom (it had a podium and enough seats). My daughter was in the back doing her “Please dad, don’t embarrass me “dance. All fathers can relate to that body-language plea. The coach of the team said to me “Alright. You have 10 minutes” as he was doing the “Please don’t screw this thing up” dance followed by the “Oh my God, we have a good team. What am I doing?” shimmy. Internally he was probably worried about me saying something that would totally undermine what they had been doing there.

Well, I took my place up at the front of the room. I could now see Katie nervously sitting in a seat in the back, her fingers up by her mouth, not trying to even make eye contact with me. The coach stood with arms wrapped, anxiously sliding back and forth, and eyes darting around the room. Such was the scene as I was about to open my mouth to say my first words. I looked around the room, trying to take the temperature of the crowd, and decided that I had to address the “elephant” that was there. “I like to thank your coach for allowing me to speak to you today. I see Katie is back there squirming, hoping I don’t say something stupid!” The girls laughed because they all understood what it was like to have a father stand up in front of their friends. This relaxed the atmosphere and I was then able to get into my opening.

The presentation went well…in fact, I was able to go a little longer. The theme must have resonated somewhat, as the team went on to capture the first round of the tournament. Not only that, but I was called in “two” more times to speak to them during the rest of the tournament. In the end, Katie’s team finished 2nd in the state, the highest finish ever in school history. They played really well and I hope that my talks, in some small way, helped a little.

After it was all over, I thanked the coach for giving me a chance to speak and congratulated him on his great job with the team and their historic achievement. But here was the “kicker”. As I was running this piece by my wife before typing it out, she said “Remember on that first night you talked to the team? You know the part about Katie sitting nervously in the corner and the coach was pacing around in the back of the classroom and you were up there in front? I was feeling the same way at home. I was in the fetal position, rocking back and forth. I just couldn’t take it!” I looked at her. She was my biggest agent, but deep down, that night’s presentation had all the weight of the world riding on it. Looking back, perhaps it was good that I didn’t know that…it was already my toughest speech.

For more stories and thoughts from Scott Olson, be sure to check out one of his speaking events or his new book, The Turnaround Coach, on Amazon kindle.